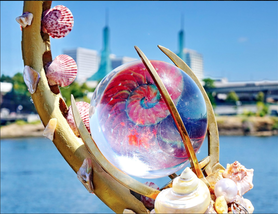 The Portlandia Mermaid Parade is a secular, noncommercial, and non-specific political event. This means that there is no single cause or agenda that can represent the diversity of the participants in attendance. However individuals and groups are encouraged to amplify the general spirit of the event and its themes which include but are not limited to themes of: merfolk mythology, community building, environmental stewardship, egalitarianism, body positivity, and inclusivity.

​As an artistic framework, the parade celebrates professional mermaids and merfolk enthusiasts  of the region, in addition to local river history and oceanic myths, legends, symbology, and spirituality. Although this event is NOT a specific protest, it is an organized gathering intended help raise critical consciousness, showcase artistic expression, promote a paradigm shift, and foster cultural, gender, and body positivity, in addition to promoting environmental awareness.

The Portlandia Mermaid Parade & Festival is a proud member and supporter of Weird Portland United (WPU)! Weird Portland United celebrates Portland's unique innovative culture, and amplifies creative expression, and incubates an even weirder future. WPU envisions a Portland devoid of barriers where citizens feel free to take risks, find success through living to their full creative potential, and take pride in their unique way of doing things.Weird Portland United discovers, promotes and nurtures the dreamers, creators, risk-takers that Keep Portland Weird. In the face of rapid change we protect and lead Portland’s culture so that all Portlanders, from natives to newcomers, can contribute to our city’s now famous culture of weird.

The Ocean is BIG enough for ALL of us!

In 2016 it came to our attention through an article published in AM NewYork, that the  CEO of the Coney Island Mermaid Parade  views other mermaid parades to be 'copycats' or in violation of some sort of conceptual property. He has even gone so far as to send cease and desist letters to other events around the country and the globe! The Coney Island Mermaid Parade threatens other events causing them to shut down. This is an unfortunate pattern of corporate bullying.

The Portlandia Mermaid Parade issues this official statement regarding the the subject of conceptual property and the sentiments expressed in the article:

The Portlandia Mermaid Parade & Festival  has been created specifically to honor the local merfolk culture here in Portland Oregon and around the NW, with specific ties to our rich river and port history. Professional and non professional mermaiding is a global phenomenon far out stretching the niche of the Coney Island Mermaid Parade. Furthermore, Portland is inherently different both geographically, and demographically, and has the right to freely celebrate its own unique history and merfolk community. Both legally and conceptually, it is our official stance that no single business or entity can 'own' the rights to having a themed 'parade' or 'festival'. Nor can such entities or businesses own the terms 'mermaid' or 'parade'. While the Coney Island Mermaid Parade is a multi-million dollar event hosted by a corporation, the Portlandia Mermaid Parade and Festival remains a FREE community event, occurring at a  different time of year and is in no way a threat to the success and lucrative profit making of the Coney Island Mermaid Parade. The Portlandia Mermaid Parade & Festival also holds a markedly distinct mission and purpose than that of the event held in New York. We encourage merfolk everywhere to parade, promenade, swim, dance, and shellebrate wherever they are! The Ocean is big enough for all the mermaids!